The Catcher In The Rye literary candle has been inspired by J.D.Salinger's celebrated novel.

Originally intended for adults, it is often read by adolescents for its themes of alienation, and as a critique of superficiality in society.

The novel's protagonist Holden Caulfield has become an icon for teenage rebellion.

It has been frequently challenged in the court for its liberal use of profanity and portrayal of sexuality and in the 1950s and 60's it was the novel that every teenage boy wants to read.

Holden loved the Museum of Natural History because "everything always stayed right where it was". And "it smelled like it was raining outside" to him. So we called this scent The Museum.

So excited about my order!! It smells great :)

M
Mallory Crayne
The Catcher in the Rye

I am a collector of all things Salinger and I am so happy to find a candle that brings a little piece of Holden’s world into mine! 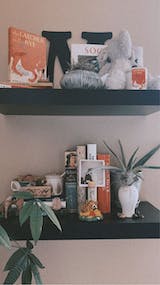